Hook’em Up Guide Service is your premier fishing charter and guide service for catching Salmon, Sturgeon and Dungeness Crabs at the famous Buoy 10 fishery near Astoria, Oregon.

Everyhing You Need to Know About Fishing Buoy 10 in Astoria

Buoy 10 fishing charters are some of the most popular in the state of Oregon. From the begining of July until Labor Day, there is prime fishing for Coho and King salmon. It’s an amazing site to see hundreds of fishing vessels searching for salmon. It’s an interesting place to fish because the tides pushing water in and out of the inlet completely change the fishing activity. This is why it’s crucial that you hire an experienced guide that not only knows how and where to fish with the tides, but also what lures and techniques will put you on the fish.

Have you ever wondered to yourself what Buoy 10 even is? The Buoy is a shipping marker out at the mouth of Columbia River.  It serves as an outbound deadline for anglers and Astoria fishing charters leading up to a no-fishing zone on the bar.

In real sense, fishing guides and Astoria, Oregon regulars know the Buoy 10 fishing zone to be the entire area that encompasses the Pacific Ocean right in front of the Columbia River and farther up and down the Ocean coastline about 5 miles in either direction.

The zone also includes the waters from the tongue point of the Columbia River on the east side of Astoria and outward to the Ocean, which is a 10 mile stretch. And the Columbia River’s mouth is approximately 5 miles wide, so you can imagine how huge of a fishery Astoria Buoy 10 actually is. 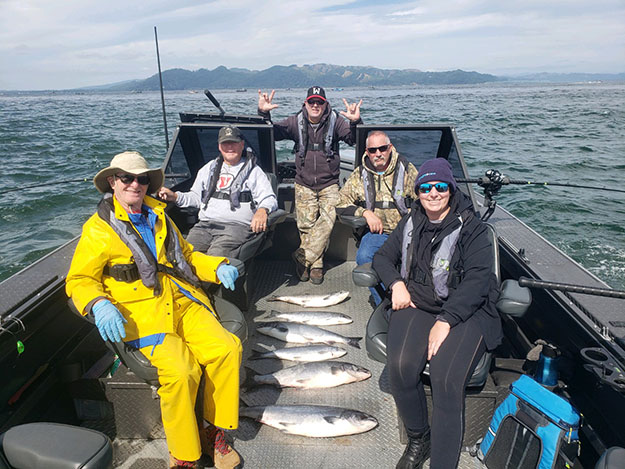 Coho Salmon or “Silvers” will enter and exit the mouth of Columbia river on their migration from the Pacific Ocean during tidal changes right before their final dash up the mighty river. Well over 50% of these Coho Salmon are up river strains heading for upstream Columbia River spots such as the Bonneville Dam, Hanford Reach, and the Snake River tributary.  Nearly every river that runs into the Columbia River will get a return of Coho Salmon.  They are sought after for their bright red flesh and mild Salmon flavor.

As far as Coho Salmon angling goes in Astoria, Oregon, you can never go wrong with the Buoy 10 fishery.  It’s definately one of if not the best Coho Salmon runs anywhere in the world. The Buoy 10 season allows retention of 2 Hatchery Coho Salmon per person per day.  At the age of 1 year the hatchery fish are released into the river system to make their way to the ocean.  But not before the Hatchery Fish Dept. clips their adipose fin off.  Marking them as hatchery raised.  Non-clipped otherwise known as “Wild” Columbia River Coho Salmon must be released.  The Wild Coho get a free pass from Astoria anglers to ensure they make it to spawn the next generation.  You will most likely catch and release a few fish to get your Hatchery finclipped 2 fish limit.  Hatchery vs. Wild is usually about 50/50.

The Hammond Marina on the West side of town in Astoria is likely to be one of the places where your Astoria Buoy 10 fishing charter will launch. It’s the closest Oregon port to the Buoy 10 zone and the ocean.  Before King Salmon can begin their annual migratory run from the brackish Buoy 10 Pacific Ocean zone to the upriver freshwaters of the Columbia River, they must acclimatize their bodies and gills for the transition.

As a result, the King Salmon stage at Astoria Buoy 10 for several weeks and feed off of the bait fish and other food sources while in the buoy 10 zone.  They put on a lot of weight during this time.  Sometimes doubling in size from the previous month.  The largest concentration of Chinook Salmon ( also known as King Salmon ) is in Astoria Buoy 10 during the month of August.  Making it the most popular time to fish at Buoy 10.  This makes August in Astoria Oregon fishing the hottest King and Coho Salmon fishing spot on the Columbia River and in the entirety of Oregon. 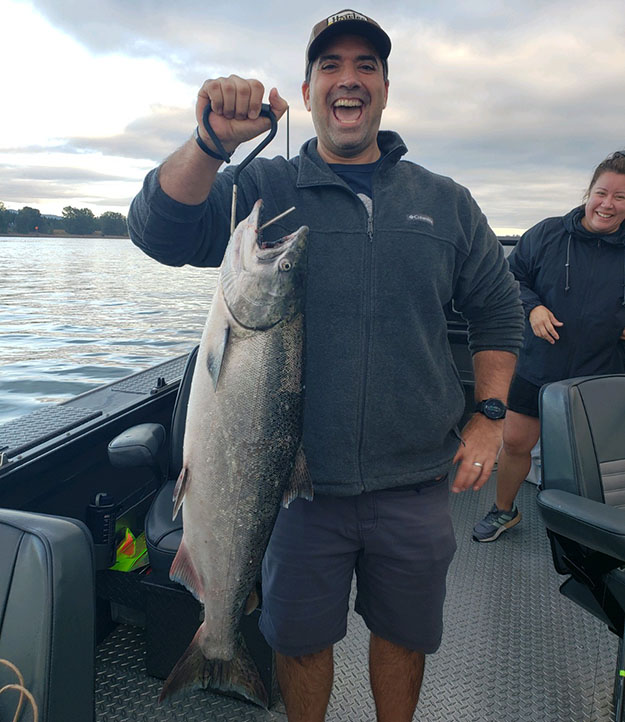 Buoy 10 is usually jam-packed with anglers at the peak of the King/Coho Salmon season. It’s not uncommon to see hundreds of Chinook fishers all in the water at the same time. The rush also means that most of the fishing season will entail half-day and full-day Astoria Buoy 10 charters.

Anglers hurry to catch the morning and afternoon tides in the fast and furious King Salmon action. At the climax of the King salmon staging, you can even land a double or triple hookup of these trophy fish.  On days when The fish are “pushing in” in big schools, you will most likely meet your King Salmon fishing limit in record time.

The entire Oregon 300-mile coastline from north to south is endowed with lots of crabbing spots, including the various bays that dot the state. That means Astoria Buoy 10 and the Columbia River estuary make the cut as two of the best places to go crabbing and clamming in Oregon.

Spend a day on an Astoria Buoy 10 fishing charter and we guarantee that you’ll have the opportunity to catch yourself some of these succulent shellfish on the Buoy 10 fishery.  The best crabbing months are November and December, but late summer can be productive as well. On some trips the Hook’em Up Guide Service captains will surprise you with the joy of pulling a few crab pots at the end of your trip.

Red Rock crabs may be a native shellfish in Oregon but it’s the Dungeness crabs that win the hearts of most local and visiting recreational crabbers in Astoria.

You’ll require a shellfish license which is different from an angling or fishing license to harvest crabs in Astoria and on the Columbia River estuary. It costs $10 for a local/Oregon resident adult’s shellfish license and also 10 bucks a piece for sport fishers aged between 12-17. Crabbing licenses are a bit more expensive for out of state crabbers. 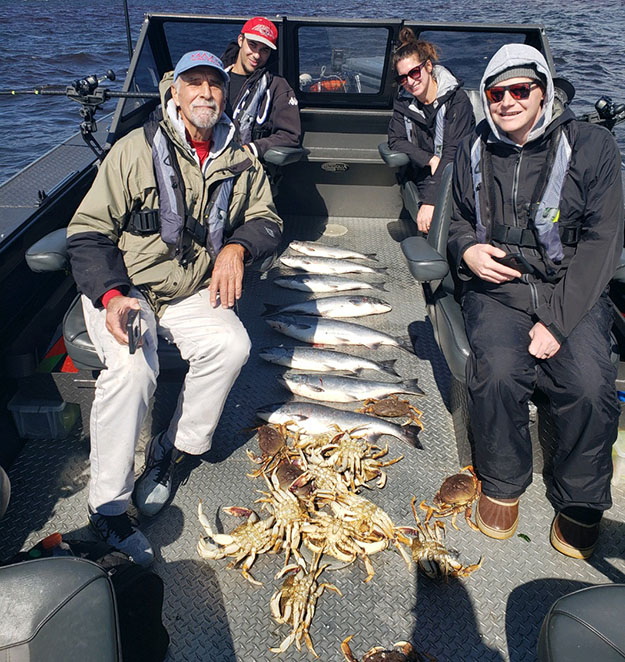 The Oregon Department of Fish and Wildlife crabbing rules permit you to only have three open crab rings, lines, or closed pots while looking for Dungies in Buoy 10 or the banks of the Columbia River in the Astoria region.

Boaters can also set bait traps or drop crab pots in the low Astoria Buoy 10 management area and the inland ends of the surrounding jetties which are productive crabbing spots. But you should avoid the ends of the jetties due to rougher waters that could prove difficult to drop crabbing rings.

Don’t forget about crabbing at the docks. It’s not exactly the same as setting bait traps to catch crabs on the river banks or in the jetties. With dock crabbing you can place crabbing pots and rings at different locations–just make sure you keep a reasonable distance from other crabbers.