The Astoria steelhead trout has the potential of weighing up to 55 pounds and can grow as long as 45 inches. Steelhead lives to 11 years, and, unlike the salmon, they spawn multiple times during their life. The steelhead is silver but will darken when it’s breeding time. They sometimes have red dots on the sides, typically when they hit the Pacific saltwater.

Interesting, right? Here’s all you need to know to catch and enjoy this great fish on Astoria. 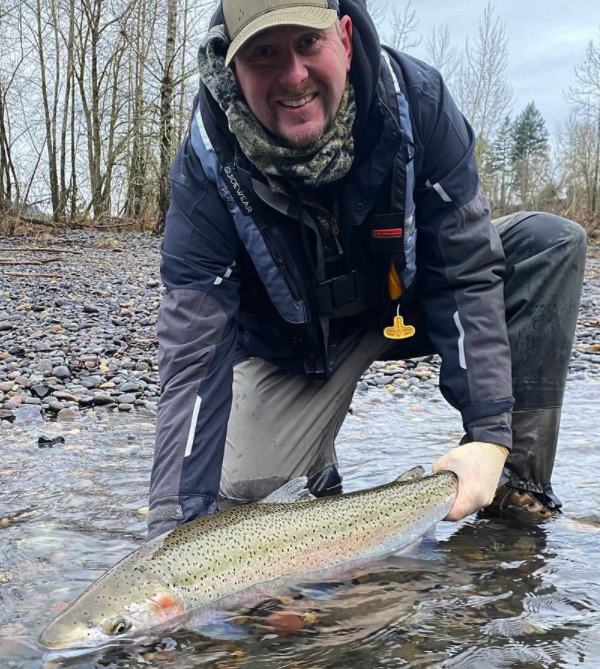 Why Steelhead Trout Fishing in Astoria is Great

The steelhead trout is native to both fresh water and see environments in North America. They tend to migrate to the ocean but will return to freshwater once it is time to spawn. What makes the steelhead different from their rainbow trout counterpart is they, for one, migrate to the ocean, and as a result, end up being much larger even when they make their way back to freshwater. The steelhead does also change color as a result of migrating to the salty ocean water.

So you will not only catch big appetizing fish, but also attractive stuff! And to top it all, Astoria Steelhead Trout fishing charters are great and very helpful. They take your fishing experience to the next level.

A worrisome trend discovered in August 2021 recorded the least number of steelhead returning from the Pacific Ocean. Compared to the previous five years, that is half of what is typically expected of the fish.

Fishing and conservation organizations have called for a shutdown of steelhead fishing for the fall season. There is a need to allow the steelhead to spawn and get the population to return to normal for the next fishing season. But after this period, you can only imagine how much of them will be there. Thanks to the decreased fishing activities.

The Steelhead Trout is a Protected Fish

At this time, the steelhead trout is listed as a threatened species under the Endangered Species Act. The cause is attributed to the construction of hydroelectric dams, overfishing, and climate change as well.

2021 had record high temperatures and drought, making the water warmer than usual, which is problematic for steelhead fish. Fishing for the steelhead trout has been a fun activity for many; however, to continue the sport, there is a need to return the fish population to what it was.

And as scary as that sounds, it comes with the thrill of knowing if you catch something, you are catching something gold and precious.

Everything You Need to Know about Fishing for Steelhead Trout Fishing in Astoria, Oregon

Young fish tend to leave the freshwater and swim to the ocean. After two years, the younglings make their way back to the freshwater to spawn, with more of them making the return during summer than in the winter. Those that make their way back in the summer can wait up to six months to spawn, while those who spawn during the winter months have to two months waiting time.

When to Get the Best Steelhead Trout

The female steelhead will dig a large hole that’s about 60 square feet on the bottom of the sea. The female then buries the eggs laid in a foot of gravel. The environment is typically a well-oxygenated and fast-flowing river such as the Columbia River estuary.  Depending on the steelhead size and species of the female can lay between 200 to 9,000 eggs during the breeding season.

Now, spawning usually happens between January and April and since Steelhead trout don’t eat during spawning time, this is the worst time to fish. The best time though, is when it gets warmer. In late Fall to Spring. The next best time is during the day when the temperatures are warm.

There are a couple of ways to catch a steelhead trout, but the most recommended approach is using a circle hook or safety pin with a live or dead bait. Get a rod and reel combination between two to three lbs. for a more effortless fishing experience. If you’re a seasoned angler, then you can go for three to four lbs. equipment as you’ll have more luck catching steelhead trout that way.

Getting the Right Gear for Catching Steelhead Trout

Most people fishing for this kind of fish prefer using seven feet medium to heavy action rod, along with a 5-6 or 7-8 size reel along with a 20lbs. test line. You can do something heavy-duty since the steelhead is a robust fish and will put up a fight before you get it on board.

If you have a drift boat or canoe, then you can opt for still fishing. This kind of approach is favorable where there’s nothing but a calm river and a view where you can do some relaxed fishing as you drift down the river.

Not in the mood to head out into the river? You can fish by the river bank if there is no obstruction or strong current. Let your hook down and wait for the steelhead to bite. You’ll need to be in an area with relatively deep water if you want to get a catch.

During winter, using the fly fish technique is best for catching steelhead trout. It does take quite a bit of practice, but you can catch the fish as they migrate to freshwater from the ocean.

Astoria for decades has been the best place in the world for getting some of the largest steelhead trout available. The probability of catching steelhead trout quite quickly as they are the more notable species.

That said, remember to abide by fishing regulations such as catch and release to avoid the fish from going extinct. And something else? Your fishing experience can go anotch higher for you, your friends and family, if you use the services of the  experienced Astoria Steelhead trout fishing charters.